Frisco is a city in Collin and Denton County, Texas (USA). It is a northern suburb of Dallas. As of the 2000 census, the city population was 33,714, while 2014 estimates place the population at more than 140,000. Frisco has been and continues to be one of the fastest growing cities in the United States. In the late 1990s, the North Dallas development tide hit the northern border of Plano and spilled into Frisco, sparking explosive growth into the 2000s.

Frisco is a city in Collin and Denton counties in the U.S. state of Texas. It is part of the Dallas–Fort Worth metroplex and is about 25 miles (40 km) from both Dallas Love Field and Dallas/Fort Worth International Airport. The city population was 116,989 at the 2010 census. The 2019 census estimate placed the city population at 200,490.

Frisco was the fastest-growing city in the United States in 2017, and also the fastest-growing city in the nation from 2000 to 2009. In the late 1990s, the northern DFW suburban development tide hit the northern border of Plano and spilled into Frisco, sparking rapid growth into the 2000s. Like many of the cities in the northern suburbs of Dallas, Frisco serves as a bedroom community for professionals who work in DFW. Since 2003, Frisco has received the designation Tree City USA by the National Arbor Day Foundation.

Frisco has many retail properties, including Stonebriar Centre (opened August 2000), a 165-store regional mall, and IKEA (opened 2005), a furniture store with an area of 28,800 m2 (310,000 sq ft) and the headquarters of the Dallas Cowboys (opened 2017). Retail establishments and restaurants line Preston Road, one of the major north-south traffic arteries in the city.

Frisco took a different economic track than many surrounding cities, and elected to use a fractional percent of local sales tax to fund the Frisco Economic Development Corporation (FEDC) rather than Dallas Area Rapid Transit (DART), the regional transportation body. The effectiveness of the FEDC, whose primary purpose is to reallocate such tax dollars to commercial ventures, is a matter of public debate.

Frisco Square, a mixed-use development, became the new downtown along with the city hall. Frisco Square has about 250 rental residential units, seven restaurants, about 40,000 square feet (3,700 m2) of commercial office space, and a few personal-service locations. The major development in the project is the new city hall and main library and a public commons. A Cinemark theater opened in December 2010. In 2012, a hospital, Medical City Plano-Frisco, was built north of the theater.

Frisco hosts the Museum of the American Railroad, which is based out of the Frisco Heritage Museum while construction on a separate museum complex continues. The nearby Discovery Center features an art gallery, a black-box theater, and the National Videogame Museum.

Frisco is home to several sporting venues, many major sports teams headquarters, and an NCAA Division I conference headquarters. In April 2011, Men's Journal named Frisco the Best Place to Raise an Athlete. 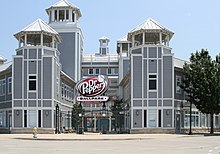 Frisco is home to a variety of sporting venues. The Dr Pepper Ballpark, a 10,316-seat baseball stadium, hosted its first baseball game on April 3, 2003. It was named the best new ballpark that year by BaseballParks.com, and received the 2003 Texas Construction award for Best Architectural Design. Toyota Stadium, which was opened August 6, 2005, as "Pizza Hut Park", is a 20,500-seat stadium. It is primarily used as a soccer stadium by FC Dallas, but also hosts concerts, local high school and college football games, including the NCAA Division I-AA (FCS) college football championship starting in 2010 and the NCAA Division I (FBS) Frisco Bowl starting in 2017. The Comerica Center (formerly Dr Pepper Arena), a combination hockey and basketball venue, is the home of the Texas Legends of the NBA G League and a practice facility for the Dallas Stars of the NHL. The Ford Center at the Star is a 12,000-seat indoor stadium, opened in 2015. It serves as the Dallas Cowboys' practice facility, host to high school sporting events, and home to the Dallas Rattlers.

Ford Center at the Star, which serves as Dallas Cowboys' practice facility

The Dallas Cowboys of the National Football League (NFL) moved their corporate headquarters to Frisco in time for the 2016 NFL football season; the complex opened in June 2016. The 91-acre Dallas Cowboys project "The Star" includes the team's headquarters and training facilities, one of which is the Ford Center, where Frisco ISD high schools and the Dallas Cowboys practice and occasionally play. It is on the corner of the N. Dallas Tollway and Warren Parkway.

The Texas Revolution of Champions Indoor Football began playing their home games at the Ford Center at the Star in 2019, but folded after three home games.

The Dallas Stars National Hockey League team is headquartered in Frisco, and the team practices at the Comerica Center.

The Texas Tornado of the North American Hockey League had been based in Frisco since the fall of 2003, and shortly afterward the league moved its main offices to Frisco. In the 2013 off-season, the Texas Tornado relocated to North Richland Hills, Texas. The league relocated their offices in 2018.

FC Dallas (formerly the Dallas Burn), a Major League Soccer team, moved their home to Pizza Hut Park (now Toyota Stadium) at the corner of the Dallas North Tollway and Main Street in Frisco in August 2005. A major international youth soccer tournament, the Dallas Cup, is hosted in Frisco each year and draws teams from around the world.

The National Soccer Hall of Fame is co-located with Toyota Stadium.

The Texas Legends, affiliated with the Dallas Mavericks, are members of the NBA G League and play at Comerica Center.

On November 16, 2017, Major League Lacrosse announced it would be moving the Rochester Rattlers franchise to The Ford Center at the Star in Frisco for the 2018 season as the Dallas Rattlers. The Rattlers folded after the 2019 season.

The Southland Conference, an NCAA Division I athletics organization, relocated its headquarters to Frisco in 2006. On February 26, 2010, Pizza Hut Park (now called Toyota Stadium) in Frisco was announced to become the host of the Football Championship Subdivision (formerly NCAA Division I-AA) championship game, formerly held in Chattanooga, Tennessee, and Huntington, West Virginia. The first matchup, hosted by the Southland Conference, was played January 7, 2011.

Frisco also has an Olympic-sized, state-of-the-art natatorium. The Frisco Baseball and Softball Association has been in action since its establishment in 1984. The Frisco Football League is an organized recreational league that allows children to play football before entering football in the school district. The Flagfootball4fun Flag Football League (FF4FUN) is an organized recreational youth flag football league that is the largest NFL flag football program in Frisco. Cycling is a popular pastime in Frisco and is supported by the city as noted on its website Bike Safety | Frisco, TX - Official Website

The sports entertainment conglomerate Dude Perfect is located in Frisco.

Find a Home in Frisco

Any home sales data appearing on this page is obtained from public record sources (or estimates, for non-disclosure states) as provided by ATTOM Data Solutions and does not comprise an appraisal or a Comparative Market Analysis (CMA). This information should not be used to replace a professional appraisal nor to determine the price of a particular property.